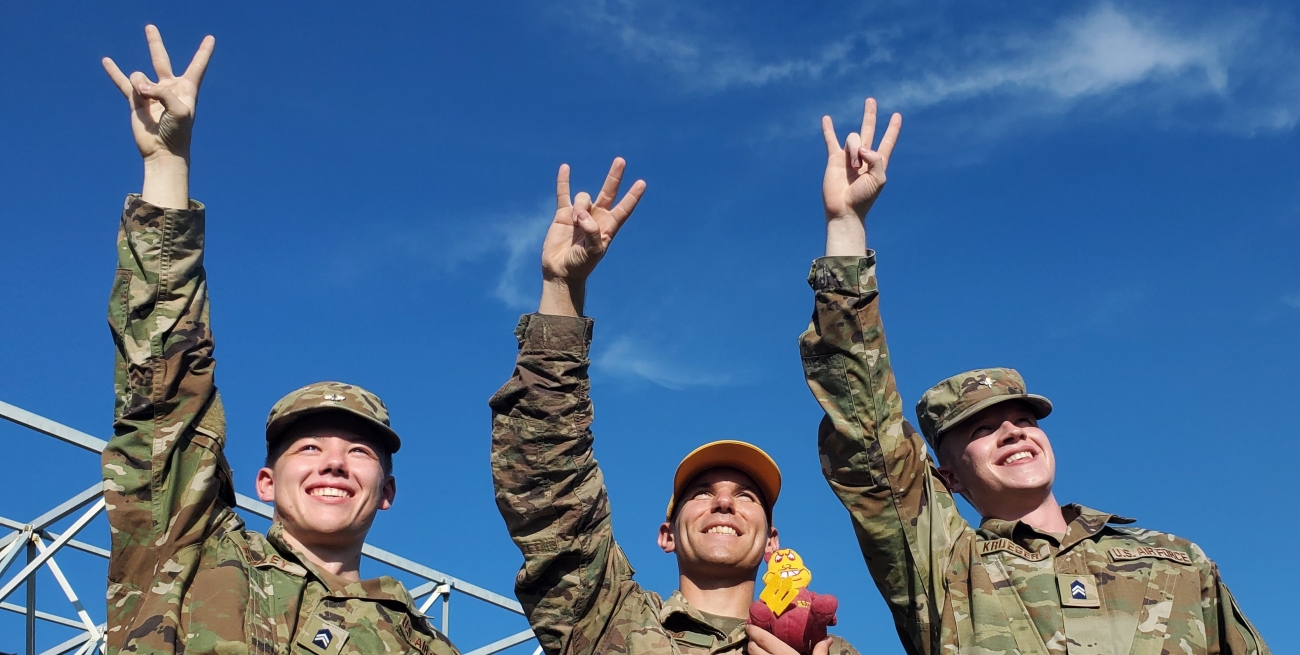 What is Arnold Air Society? 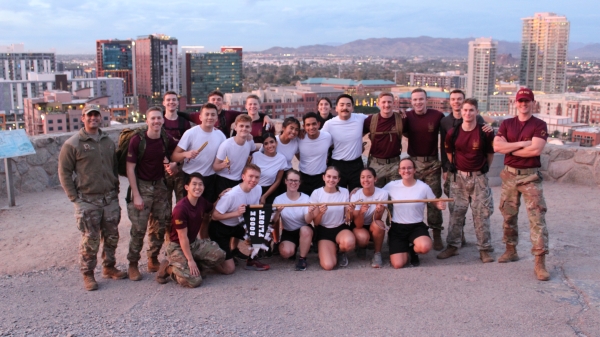 Our Mission: To create outstanding Air Force Officer candidates through the implementation of additional training while working as a society to further the purpose, traditions, and concepts of the United States Air Force.

Named after Air Force aviation pioneer, General H. H. Arnold, Arnold Air Society is a collegiate organization that specializes in offering supplementary training and unique opportunities to AFROTC cadets outside of their Detachment's regular schedule. Cadets in Arnold Air Society dedicate time to the preservation of Air Force heritage as well as their respective communities through leadership development within a nationwide command structure.

Arizona State University is home to Tex May Squadron, residing within region X (10) of the Arnold Air Society national structure.

During summer camp training in 1947, a group of AFROTC cadets from The University of Cincinnati discussed the possibility of creating an honorary society and presented their idea to Captain Nollkamper, one of their current Cadre members. A committee of cadets was formed to write a constitution and to find a name, eventually resulting in a unanimous decision to honor General H. H. Arnold, one of the greatest leaders in aviation history. Permission to use General Arnold as the namesake was granted in December of 1947, with provisions that the society begin on a local basis at the University of Cincinnati, with eventual expansion of a spontaneous nature. In April of 1948, the United States Air Force officially recognized the society. Today, Arnold Air Society has chapters at many different universities across the United States.

How do I join Arnold Air Society?

To join Arnold Air Society, you must complete a 10 week training program that runs in the fall or spring semester of every year. The training will promote the development of leadership skills while stimulating the learning of many fundamentals that will help you succeed as a future officer in the Air Force. The Arnold Air Society training program is by no means easy and will test you both mentally and physically. By the end you will have accomplished something to be proud of and will have received some of the best training in the nation. 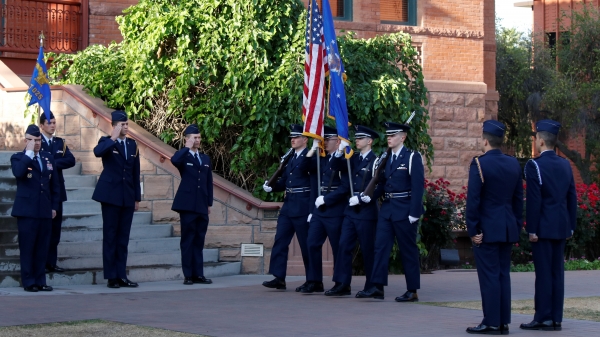 The Color Guard is an extracurricular activity in Air Force ROTC that trains cadets in proper Drill and Ceremony procedures for Color Guard events. Military professionalism as well as customs and courtesies are emphasized greatly as the Color Guard is often the most prevalent representation of the face of Detachment 025, AFROTC, and the Air Force. Performances include university sporting events, professional basketball games, detachment events, and other specialized occasions.

Any cadets interested in joining the Color Guard are welcome.

To get in touch with Detachment 025's Color Guard team, please feel free to send an email to det025cg@gmail.com

What is Silver Wings? 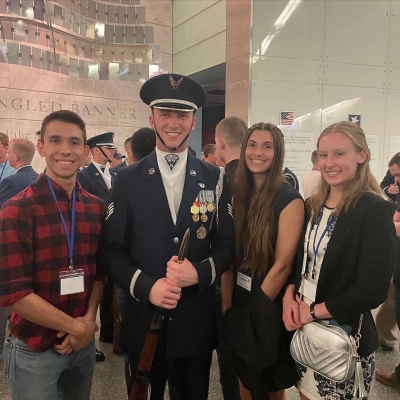 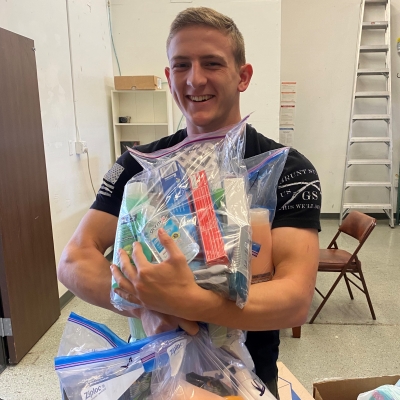 Silver Wings is a student professional organization dedicated to developing civilian leadership skills and providing service to their community. Each chapter consists of college undergraduate and graduate students who volunteer together to help various non profit organizations within their community, increase professional skills through interaction with organizations, and have opportunities to travel across the nation gaining valuable leadership skills and experience in a professional business setting. Although we are supporters of national defense, our service products have a wide range of reach including student mentoring, health and wellness, and even assisting others with disabilities.

How do I join Silver Wings?

To become a member of Silver Wings, you must first have the commitment to serve and complete Associate Member training. Associate Members attend 5-6 training days over the course of a few months that help them learn what Silver Wings is, as well as build skills to become effective civic leaders.

For additional information regarding becoming a member of Silver Wings please contact: 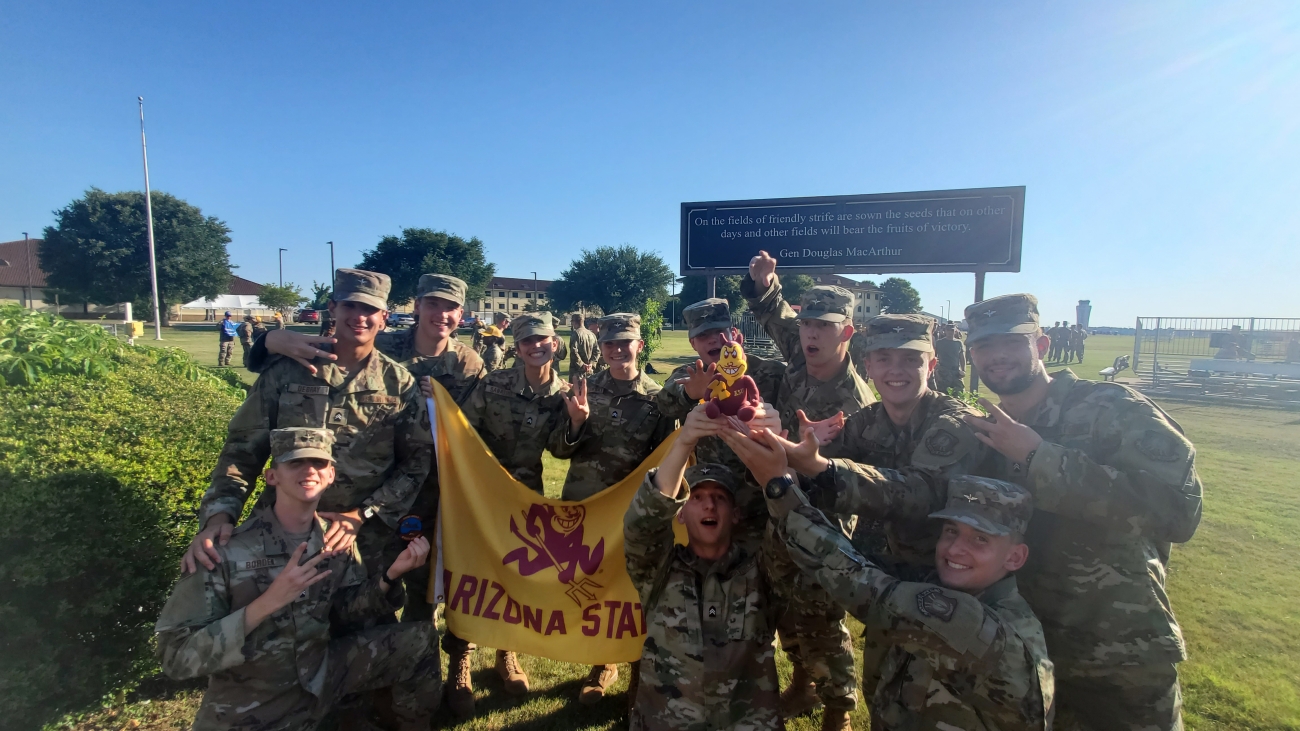